Which is London’s most commutable borough?

With its rich cultural heritage, trendy bars and iconic music scene, London’s offerings have long attracted people to the capital. However, relocating anywhere requires careful consideration of numerous factors, which in an ever-changing city like London can prove difficult.

As champions of local knowledge we recognised this challenge, and that’s why we ran a survey of over 700 Londoners from all 33 boroughs to find out where in the capital ranks best for each of the key factors. First up: transport.

When a 5-minute tube delay can make the difference between getting into the office on time or not, there’s no doubt that transport is essential to enabling the bustling life of the average Londoner.

Our first question asked our respondents how satisfied they are with their daily commute. The west London boroughs of Hammersmith & Fulham and Hounslow came out on top, with above-average levels of satisfaction of 76% and 74%. This vein of satisfaction flows into the city centre boroughs of Westminster and Islington, potentially correlating with the popular Piccadilly and District lines. 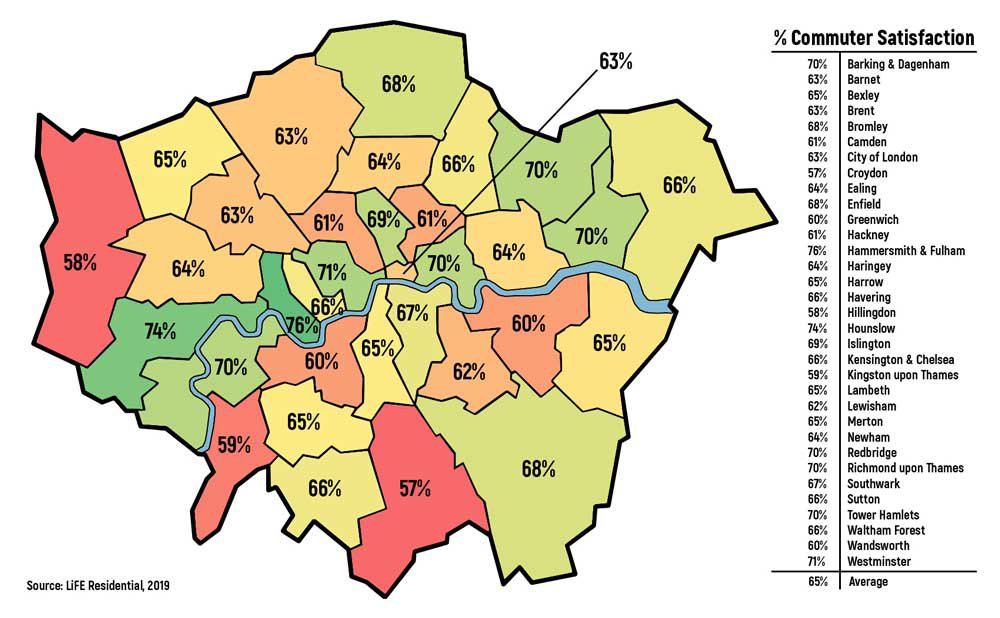 A quick hop west to Hillingdon reveals a different picture, with a satisfaction score of just 58%. Low commute satisfaction levels are also present in Kingston upon Thames and Croydon, perhaps due to the outer regions relying more upon national rail services and their associatedfrequent service disruptions.

The up-front costs of travel are arguably at the forefront of most Londoners’ minds, and our study found the average monthly commute lasts a reasonable 39 minutes and costs £96. However, with London’s huge variety of available transport methods this can vary significantly. 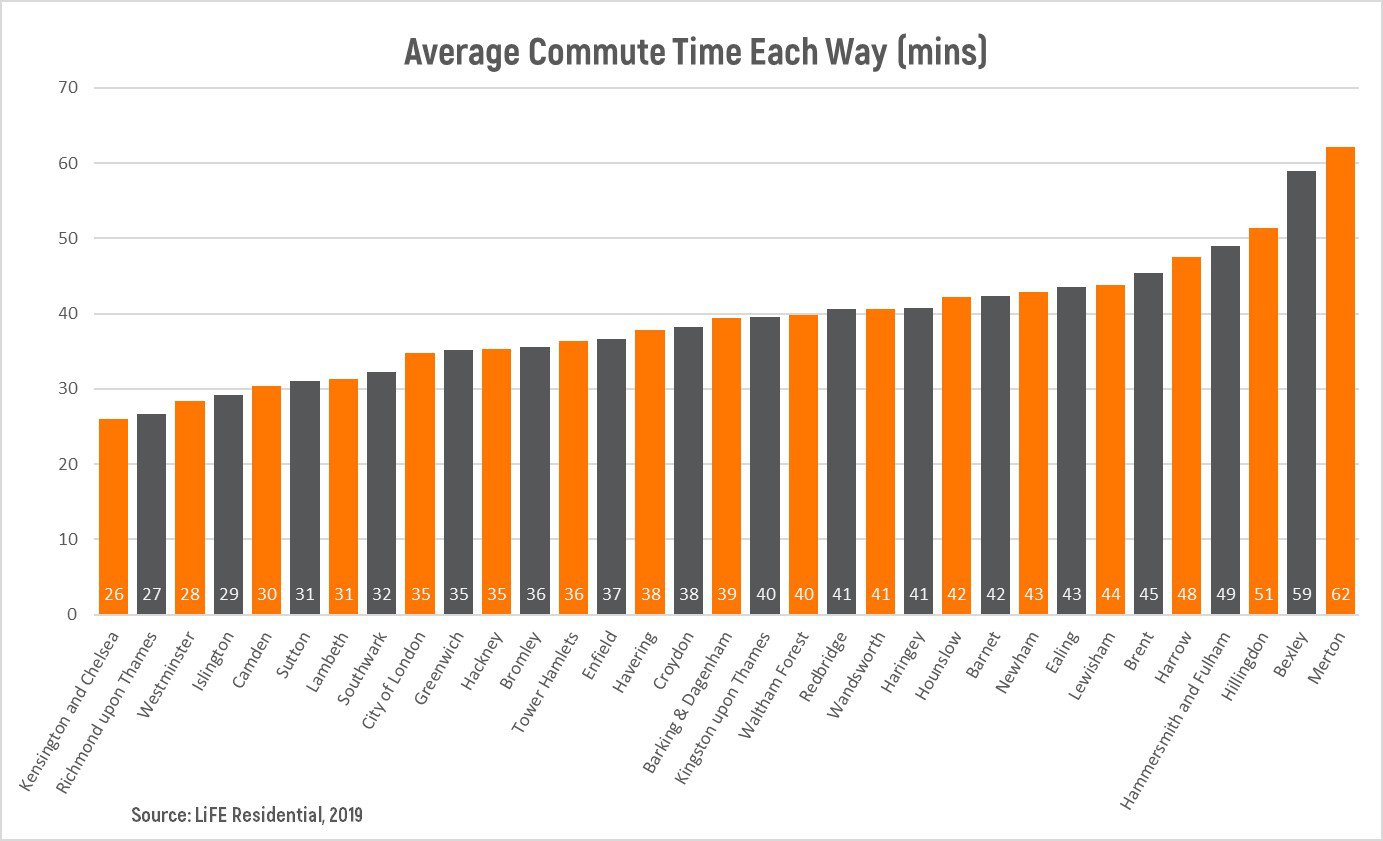 Unsurprisingly it’s the central boroughs which boast some of the shortest commute times, with Kensington & Chelsea’s famously suave residents reporting an average journey time of just 26 minutes – roughly the same time it takes towalk from King’s Road to Harrods!

At the opposite end of the spectrum lay several of the outer city boroughs, with Merton reporting an eye-watering journey time of 62 minutes –double that of their Kensington counterparts.

Ideally placed for picturesque commuting by foot or by bike, Richmond upon Thames bucks this trend, with the second-shortest commute time and an enviably low average monthly commute cost of just £44. 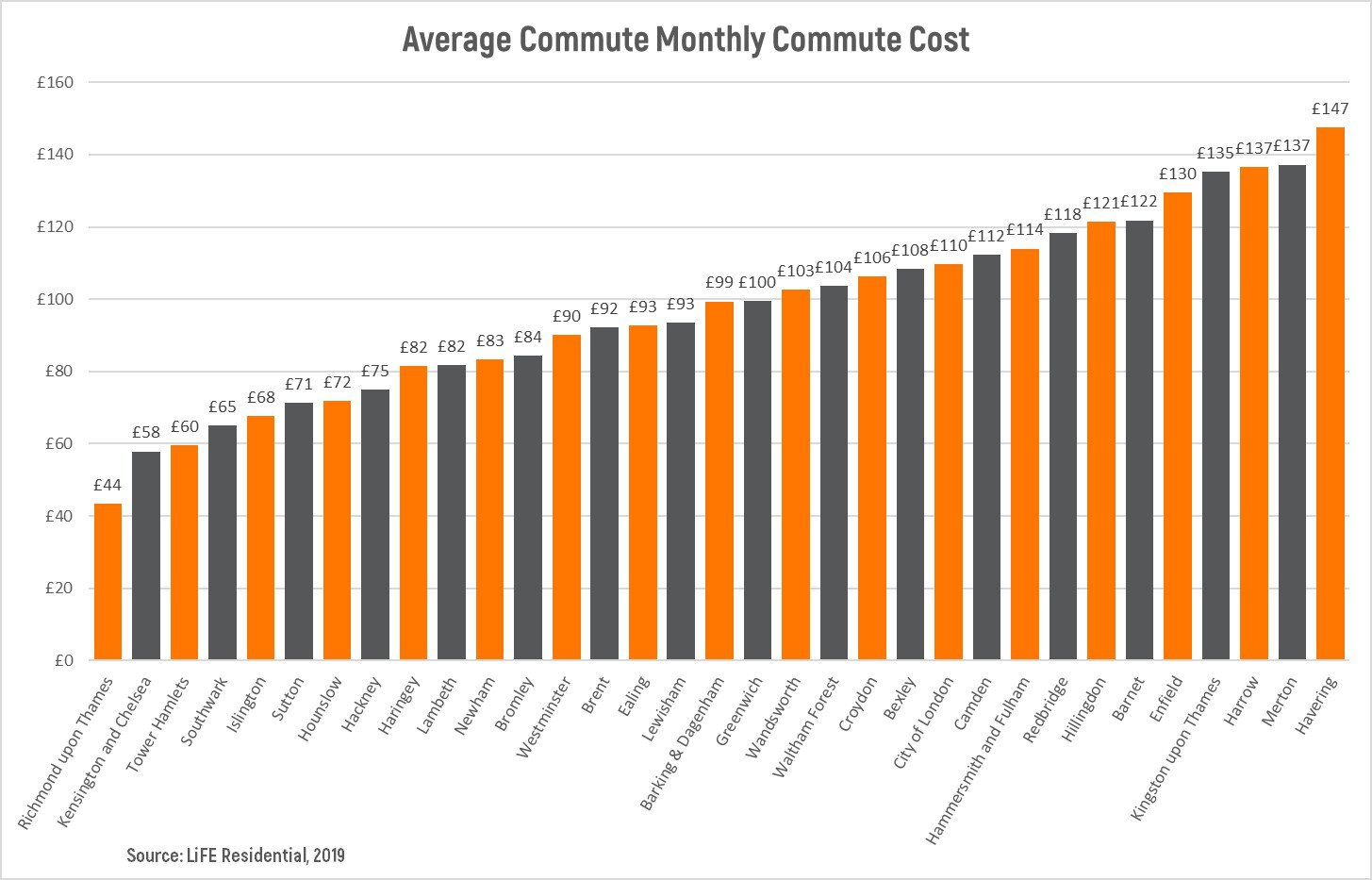 Finally, from graciously surrendering a seat to a ‘baby on board’ badge, tocheekily holding the doorsfor a second or two, a bit of commuter kindness can go a long way - that’s why our final question asked residents to rate how friendly they feel their fellow commuters are. 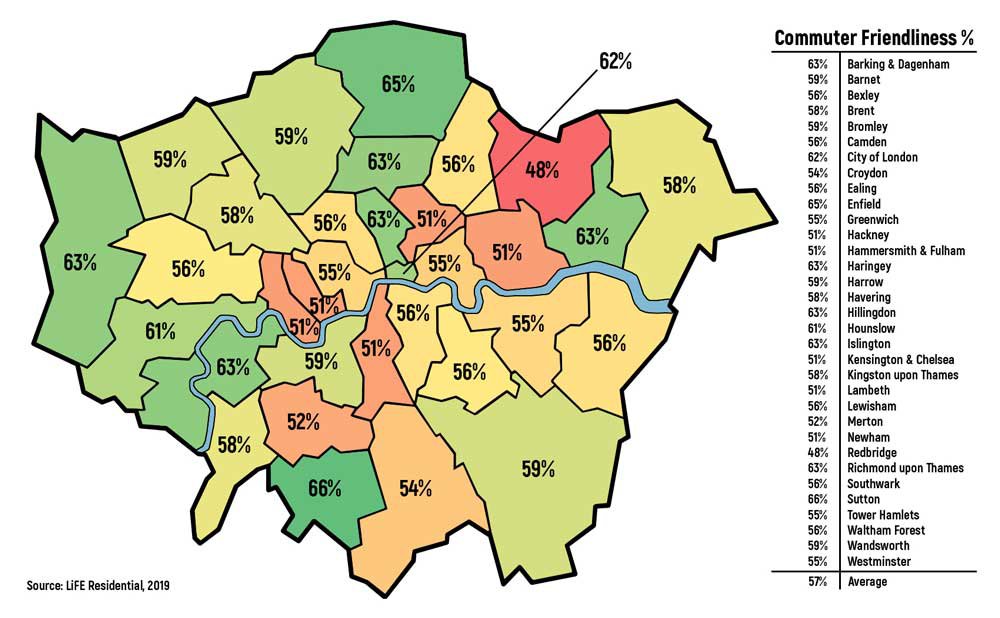 We gave each borough an overall commutability score out of 100, with the clear winner being Richmond upon Thames with 83/100. With above-average commuter satisfaction and friendliness, it’s difficult to look past the benefits offered by this suburban south-west borough. 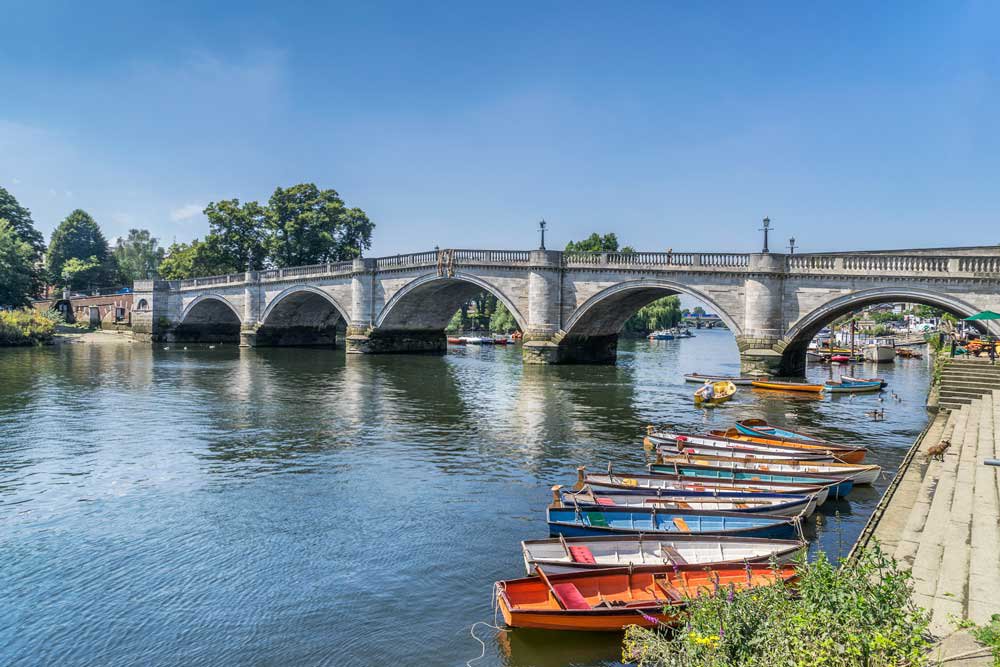 Richmond upon Thames offers the ideal location for central London and local commuting, with 50% of respondents reporting the District Line and Overground services as their primary mode of transport, whilst the other half take buses, drive, walk or cycle every day.

Combining quick city connections with less congested streets and a village-like atmosphere, one resident summed the Borough up perfectly: “I love Richmond because it has a cosy charm and community feel, but it’s just a stone’s throw from the hustle and bustle of the city!”. 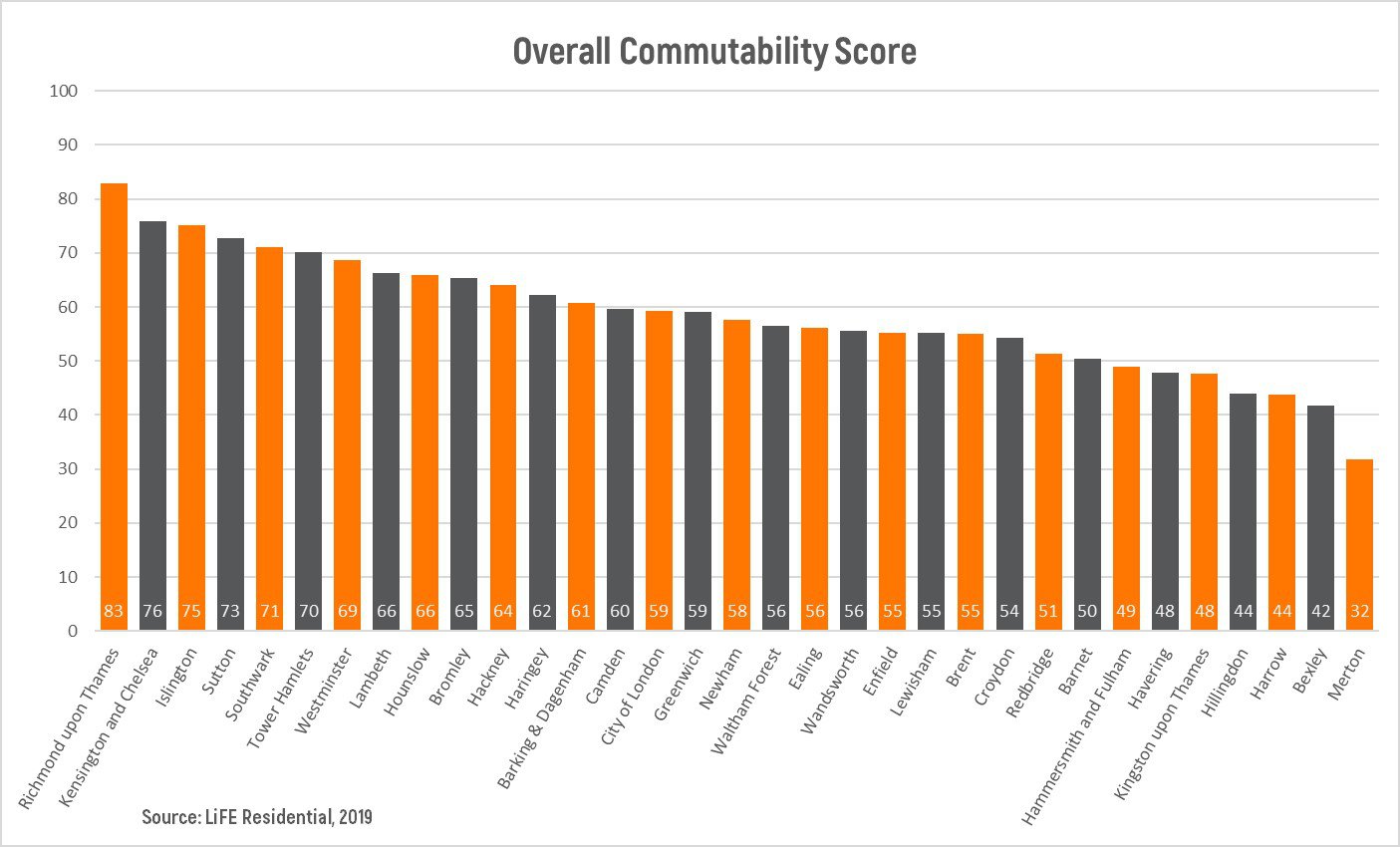