Which is London’s greenest borough?

As champions of local knowledge we recognise the challenge of finding the perfect place to move to in London. That’s why we recently ran a survey of over 700 Londoners from all 33 boroughs to find out where in the capital ranks best for most essential factors. In the last part of this mini-series we gathered London’s opinion on all things environment.

The environment has recently enjoyed an unprecedented level of publicity, with scrutiny falling particularly on the impacts of city living. As policies such as the ULEZ zone and the Mayor of London’s Car-Free Day can testify, there’s perhaps no metric more important to Londoners than air quality, and that’s why our first question asked residents to rate the air they breathe.

Unsurprisingly the highest ratings are generally found in the outer-London boroughs. Barking & Dagenham and Merton had the joint best air quality approval of 66%, whilst Richmond upon Thames was close behind. 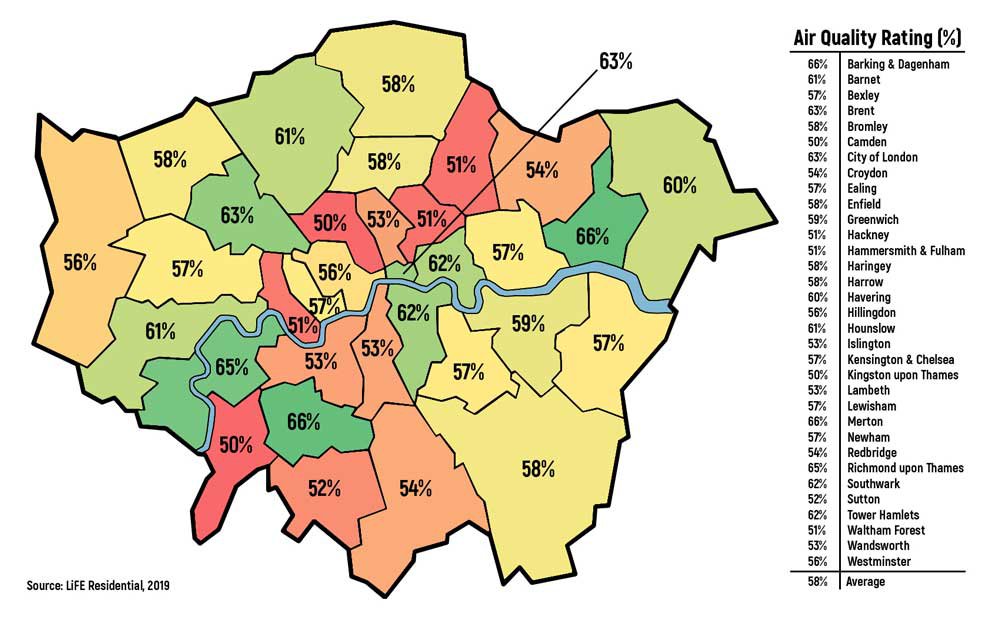 Some of the lowest approval ratings were reserved for the central boroughs of Hammersmith & Fulham and Hackney, however, it was outer-London’s Kingston upon Thames which shared bottom honours with Camden at 50%. Inspection of the heatmaps indicates a potential link between air quality and crucial arterial roads such as the A23 in Croydon, the A3 in Kingston and the A12 in Waltham Forest, with these car laden routes likely influencing local air quality perceptions.

Moving from invisible to visible indicators, our next urban environment factor was green space. Richmond upon Thames came top of the pile with a rating of 78%, with other boroughs possessing high profile parks such as Wandsworth and Greenwich also scoring highly. 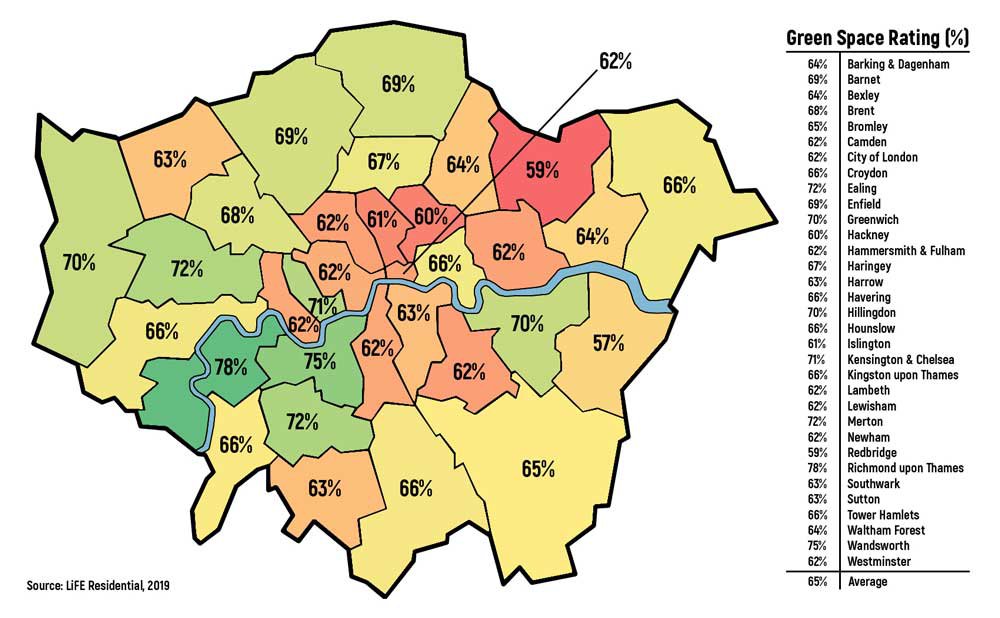 As a natural remedy to CO2 emissions and pollutants, we’d expected to see a link between general green space and air quality. There is some evidence to support this, for example, Brent received the highest air quality approval in north-west London and an above average green space rating, however this trend doesn’t hold across the city, indicating that there is considerable complexity and nuance to London’s local environments.

Street cleanliness was our next consideration, with the title of the cleanest streets in London going to Newham as its residents gave an approval rating of 71%. At the opposite end of the spectrum was Redbridge (48%), with Camden and Hackney once again in the bottom three. 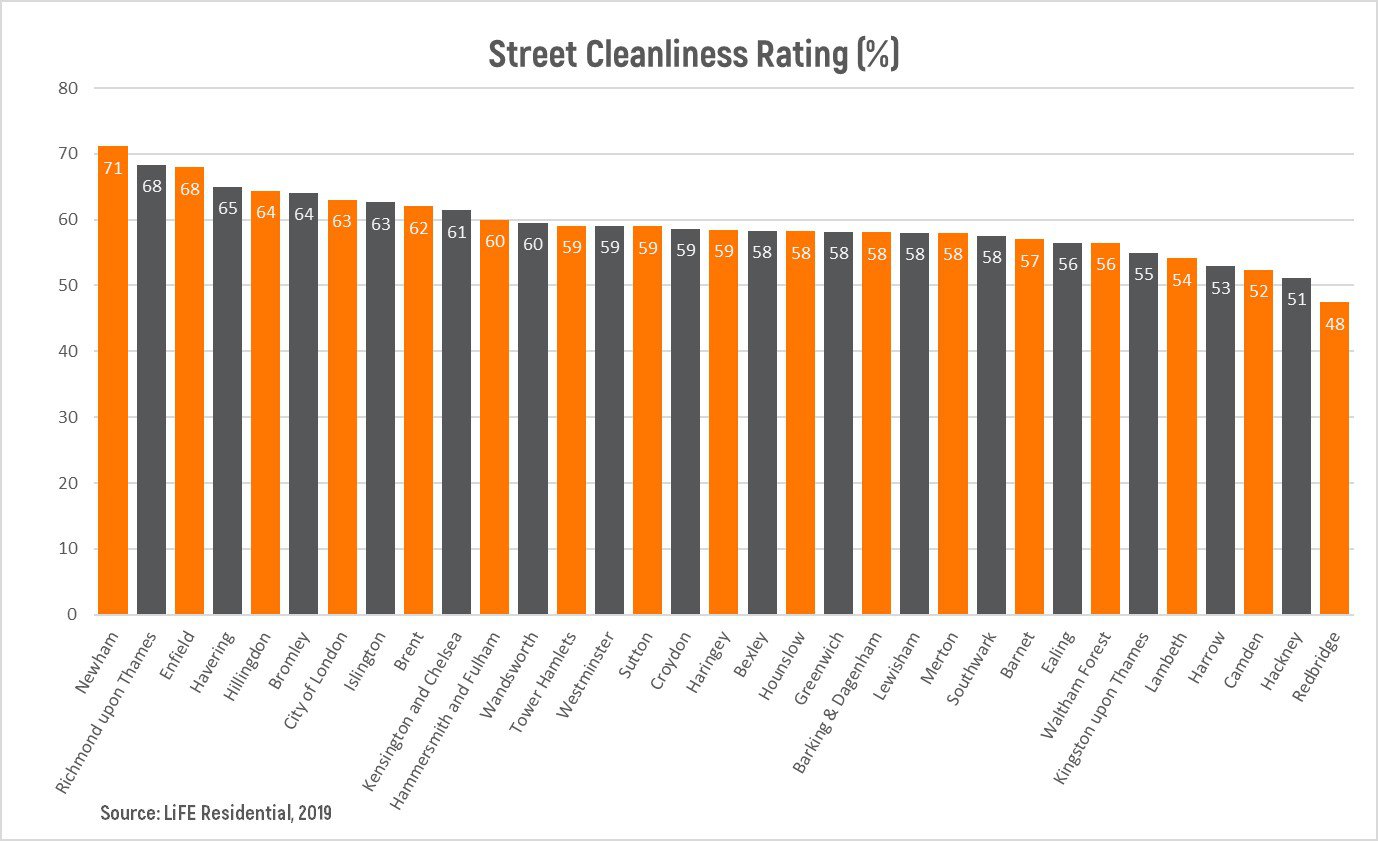 As environmentalism continues to occupy the national consciousness, there’s a palpable feeling of proactivity within the public as we each try to do our bit. Despite recent criticism, recycling remains one of the most common day-to-day environmentally friendly actions and therefore it formed the basis of our final two questions. 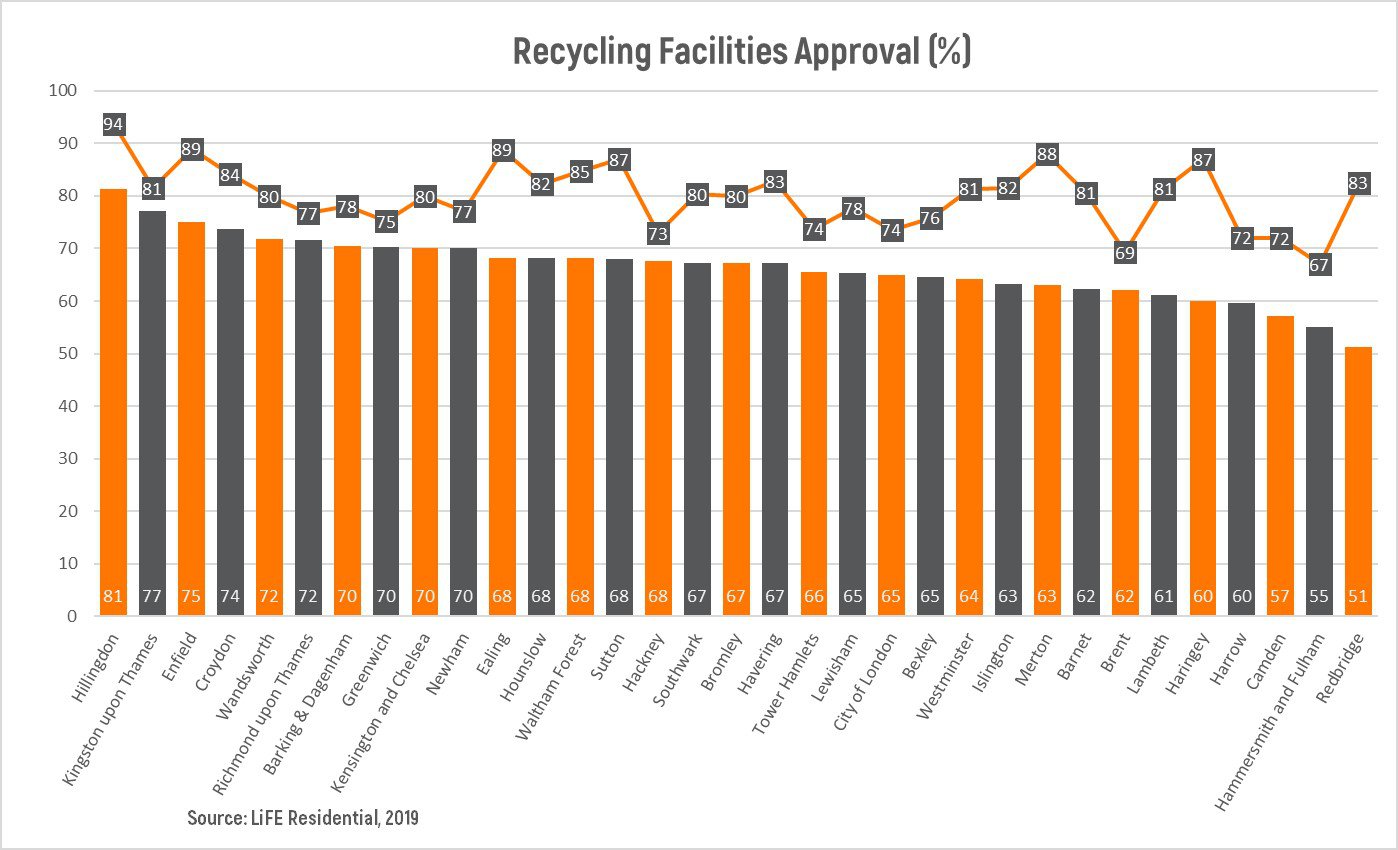 Similar to street cleanliness there’s little to pick between many of the boroughs, although Hillingdon was the clear winner with 81% approval of its recycling facilities and the highest reported resident recycling frequency in London (94%).

On this note, recycling frequency also seems to have a vague correlation with facility approval which isn’t inconceivable given residents who take a dimmer view of their council’s recycling facilities may well be less inclined to use them.

Aggregating the scores for each environmental consideration we gave each borough an overall score out of 100, with the results being less clear-cut than for our transport study.

But once again, thewinner was Richmond upon Thames with a score of 71/100 making it London’s greenest borough. This leafy district ranked second for air quality and street cleanliness whilst boasting the best green spaces in London – unsurprising given the neighbourhood is dominated by Bushy Park, Hampton Court, Kew Gardens, and of course, the sublime Richmond Park. 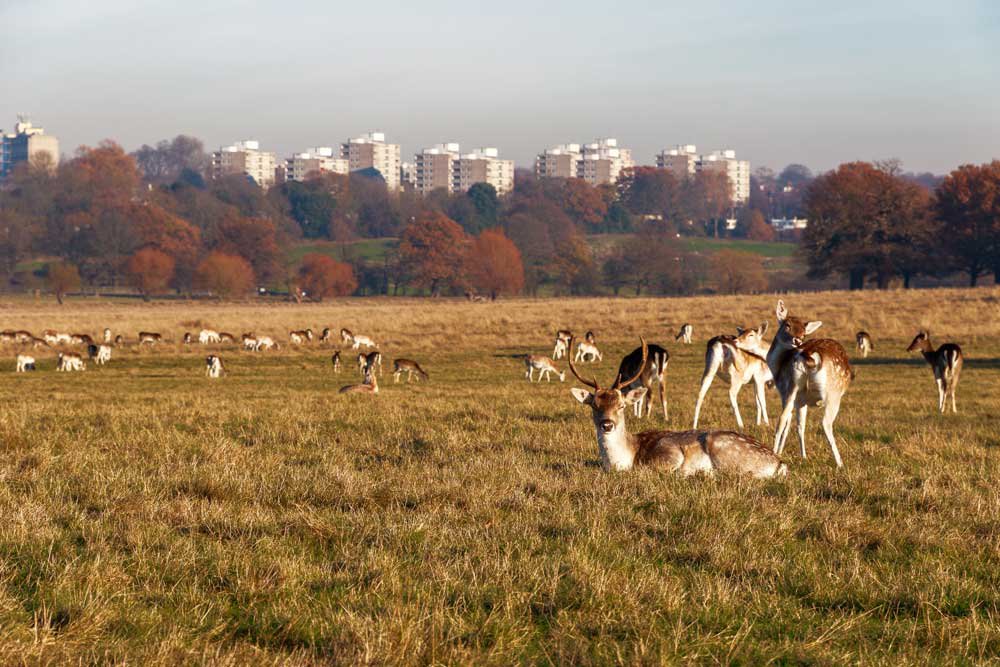 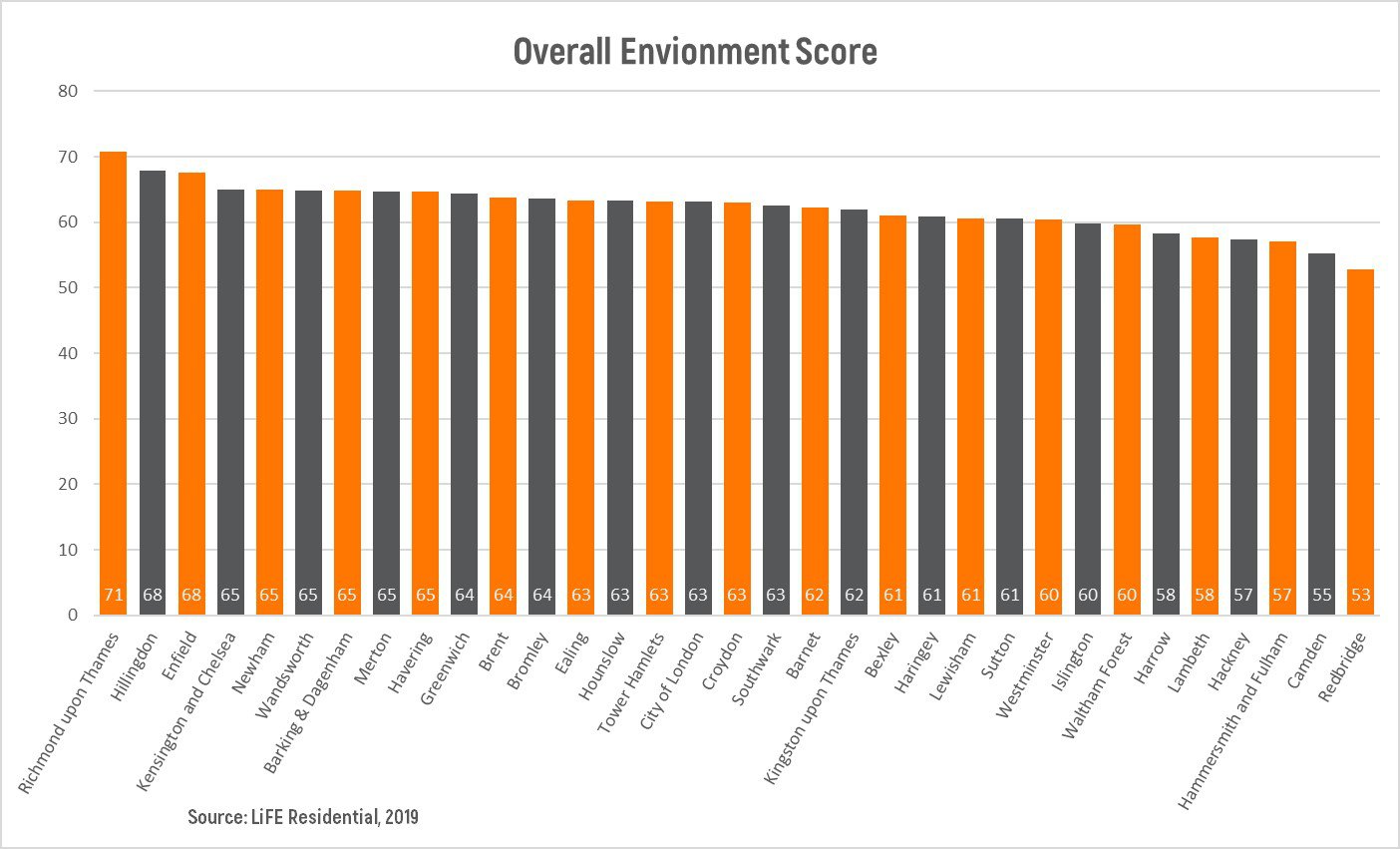