Oh my . . . finally some sun! I think we can all agree London during summer is one of the best places to be.

There may be a tourist at every corner you turn, the kids are let loose for the school holidays, and the sunshine might be scorching at times, but fear not! None of that will matter when you’re faced with a line-up of cool breezy parks like these to enjoy.

“London's Hyde Park is one of the greatest city parks in the world.” 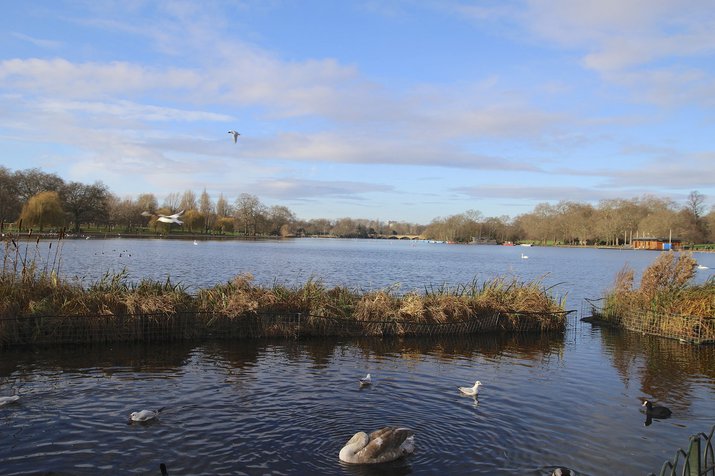 At 1.5 miles long and over a mile wide, Hyde Park is one hell of a gloriously vast royal park that will catch your attention with its stunning tranquil beauty. Centrally located and covering 350 acres with over 4,000 mighty trees, a large sparkling lake and river, a meadow and ornamental flower gardens, there’s a good chance you’ll forget you are right in the centre of London – perfect for taking a break in from a London shopping spree.

From sunbathing, picnicking and swimming to boating, horse-riding and cycling, there is something for everyone in this splendid park. Not to mention, Hyde Park is home to a number of fascinating buildings and monuments, such as The Serpentine Bridge, the Joy of Life fountain and the famous Achilles statue. If you’re out and about on Sunday, head to Speaker’s Corner to hear London’s most vocal orators share their opinions with the world, and also keep in mind that The Joy of Life fountain is a popular spot for splashing around in when the weather heats up.

“Battersea park has so much going for it that it's almost unfair.”

Boasting Thames views, a truly unique art gallery (The Pump House) and a family-run zoo – what else does a park enthusiast need!

Battersea Park is situated just a couple of miles south of Marble Arch, considered by many to be the most interesting of all the London Parks. An inner-city park with so much variety, hidden secrets, and activities. Battersea Park was opened by Queen Victoria in 1858s and now historic and attractive gardens are found in all corners of the park.

A kids favourite as the adventure playground is superb, with plenty of original and imaginatively-built features. But really, it's all about the animals for the kiddies and a lot of the time the adults too. An enclosure containing deer with a zoo that includes anything from lemurs and meerkats to pygmy goats. Another added extra would be the Battersea dogs and cats home with many fluffy animals needing some loving!

Charming and mysterious- this park is not to be missed.

“Greenwich park’s views are beyond spectacular”

Greenwich Park boasts the honour of being the oldest enclosed Royal Park. Take a look at Queen Elizabeth’s Oak! It may look like a mossy overgrown clump of wood, but it’s been in the park since the twelfth century. Legends say Henry VIII once danced around it with Anne Boleyn and Elizabeth I often picnicking on it.

This park is also a 13-acre grassland providing an urban oasis for our woodland friends - deer, foxes and over 70 species of bird. Not only does it include a child-friendly boating lake, six tennis courts and the Greenwich Meridian Line, (i.e. prime meridian), it’s also home to The Royal Observatory, where the views from the top of the hill across to Canary Wharf are known to be breath-taking.

Regent’s Park is one of the most stunning parks across the country, with a beautiful panoramic view of the city, the largest outdoor sports area and an Open-Air Theatre, where performances are run over the summer period – there is so much to see and do!

You can even take a trip to the Zoo that is situated on the northern edge of Regent’s Park; London Zoo houses a collection of 755 species of animals, making it one of the largest collections in the UK. Although we’d recommend a walk beyond the cages to explore the wildlife, as there are dozens of birds near the lake with foxes and squirrels all over the park. 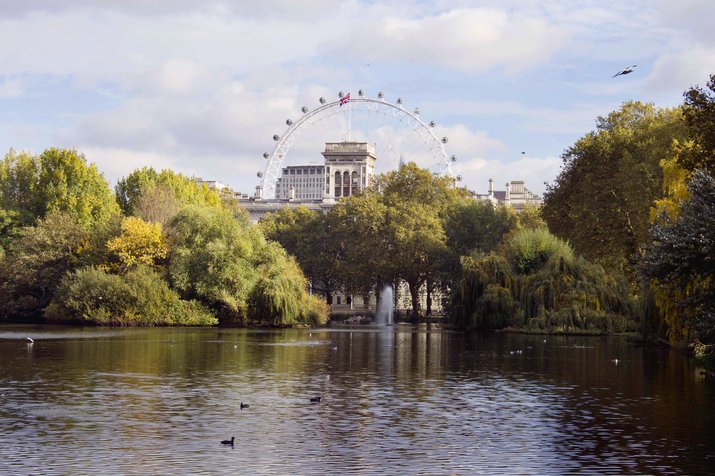 “Tranquillity amongst the pelicans, in the centre of London”

Every year millions of Londoners and tourists visit St James's Park, the oldest of the capital's eight Royal Parks, which includes The Mall and Horse Guards Parade and is at the heart of ceremonial London, providing the setting for spectacular pageants including the annual Trooping the Colour.

Situated in the heart of London, St. James Park is famous for its lovely pelicans, which were first donated as a gift from the Russian ambassador to Charles II. Now every afternoon you can see them perching in the golden warm sun waiting to be fed their fish for the day – and some even go as far as stealing their delicious fish from the penguins in the neighbourhood, at London zoo. Gregarious, social creatures with the most entertaining antics! Your day will fly by.

“A stunning host of golden daffodils”

Although situated very close to St James's Park,  Green Park is very different in character. It is encircled with impressive large established trees and glorious green grassland giving it a truly regal feel. It is also surrounded by Constitution Hill, Piccadilly and the Broad Walk.

This park was first recorded in 1554 when Sir Thomas Wyatt led a rebellion in protest against the marriage of Mary I to Philip II of Spain. The area was meadowland used for hunting and the occasional duel. Now one can gather around to watch the Royal Gun Salutes!. 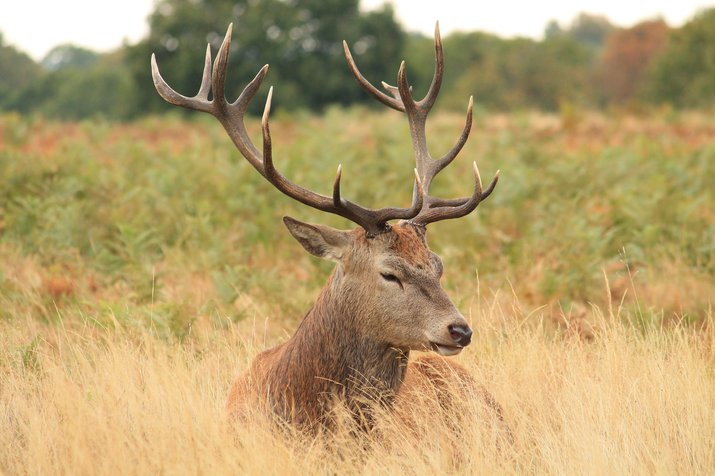 Finally we are at the largest of the capital's eight Royal Parks, as well as the biggest enclosed space in London. The park is a National Nature Reserve and is home to the beautiful Isabella Plantation and herds of Red and Fallow deer.

A magnificent park with an endless amount of various birds, deers, butterflies and plants. Richmond is so huge that you’ll need a whole day to explore it all which is great news for those travel enthusiasts or even just those needing a break from everyday LiFE. Apart from exploring and enjoying the wildlife, visitors have the option to hire bikes, play golf, go fishing and/or horse ride.

“A cheery but moving atmosphere”

Keen to visit Queen Elizabeth Olympic Park to relive the spirit of the London 2012 Olympic Games? Where to begin - there’s something for everyone to enjoy at the UK’s most exciting urban park - it even has its own official webpage.

The park is ideal for any type of sports activities or just for the stunning views at ArcelorMittal Orbit. A favourite for most would be a fantastic trip on Europe’s tallest tunnel slide with the opportunity to try UK’s highest freefall abseil!

When your day has winded down, finish it off with a drink and a bite to eat at one of the many impressive cafes and restaurants located all over the park.

“A surreal and special place, a must see”

With wld rolling hills, the grassy sprawl of Hampstead Heath makes a delightfully untamed contrast to the manicured lawns and flowerbeds found elsewhere in the capital. It is no wonder that this park has provided the inspiration for countless films, books and poems. For example, Hampstead was home to the famous poet, John Keats. This natural refuge was also the inspiration for writer C.S. Lewis, who imagined the world of Narnia while walking through the park on a snowy day. Situated on a hilly country, the Heath has one of the best and highest panoramic views with beautiful mature trees and loads of fresh air - who wouldn’t feel inspired?

Hampstead heath stretches across 791 acres of woodland, playing fields, and swimming ponds that are perfect for a refreshing dip on a hot summer day. Connect with nature and have a look at the butterfly garden or relax with a book in the shade of the trees. In windy weather, look out for any kite fliers, and maybe even have a go at flying your own kite.

“An overlooked gem among the London parks”

Last but not least- Victoria park is one of the oldest, most popular and historically important parks in the city.  It holds various sporting events, giving you the opportunity to get involved in lots of different sports. From football, to tennis, and boating - whatever your choice, fun is guaranteed. Victoria Park is also used as a concert venue and hosts many festivals each year, so keep on the lookout for a musical treat coming your way!

When you have worked up an appetite, make your way to one of the parks two lovely cafes, The Pavilion Cafe and The Park Café, where your taste buds will be reminded of what delectable food tastes like.

After some snacks, a tranquil stroll around the park is an excellent way to relax and view many historic artefacts and features with vast decorative gardens and grasslands surrounding you.

So, where will you go first?!

LiFE's Top 5 Rentals of The Week: The Autumn Edition

Welcome to LiFE's Top 5 Rentals of The Week: Autumn Edition. As the summer draws in and autumn begins, we’ve pieced together the cosiest looking properties we currently have on the market.

Despite drop in demand, the student renters' market is recovering well

Due to Coronavirus implications, the demand of international students within the London rental market has dropped by about a quarter this summer. However, the student renters are not completely lost, claims London-based estate agency LiFE Residential.